Another interview from the Grain Edit archives.
Dress Code Interview... 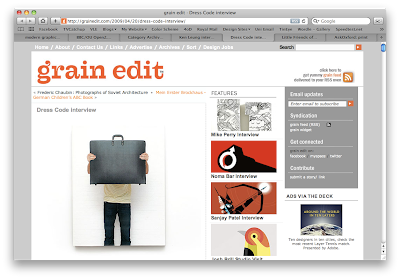 Can you give us a little back story? How did you two meet? What clicked
between you that you would move, work, and follow each other across the
country?
We met in while studying at California College of the Arts. At first we didn’t like each other so much because we were very competitive. Eventually we moved in the same house with mutual friends and our work ethic glued us together. We’d get each other’s feedback while working on freelance projects or homework. Then we decided to collaborate on a project and that turned out a to be a success. Collaborating made us realize that we could combine our skill-sets and greatly improve the quality of our work. Good partners are really hard to find and it was lucky that we met so early on in our careers. Also, it was more fun to hang with a friend while working yet another long night.

After graduation, we came to the conclusion that we should move out of San Francisco. Despite the incredible burritos and beautiful scenery it was time to move to a bigger city with more opportunity. The firms we really wanted to work for were in New York so it made sense to go there. Dan eventually got a job at MTV and Andre followed him soon thereafter. Once we both got to New York, dress code was in full effect. 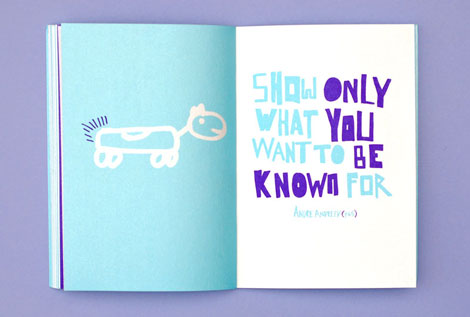 How long have you been dress code?
The idea of dress code began while we were still in school and the first time we were published as dress code was around 2004. We officially quit our day-jobs and got an office in June of 2007. 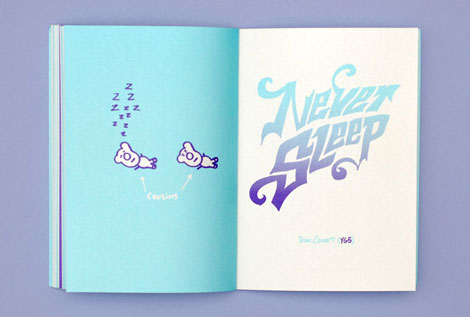 Can you tell us about the conception of the book? Why did you decide to
write one, and how long did the process take?
As we were about to graduate from CCA we found very little material that explained how to transition to the professional field. We learned as we went along, preparing our portfolios, working freelance, interning and eventually getting jobs. We liked being in challenging situations that were way over our heads. Often we failed but in our failures there were many valuable lessons. We saw the void, and need for a book on the topic, and we started writing. Neither of us are fantastic writers so that made the challenge even more fun.

After writing a small section we shopped it around to a few publishers — eventually de.Mo press took a chance and offered to publish it. Once we had completed the book we had to raise some funds to finish printing it. That was a lengthy process that was full of too many uncomfortable meetings and phone calls. We switched printers to lower costs and that set us back as well. After all the trials and tribulations it took us about three plus years from conception to final production. 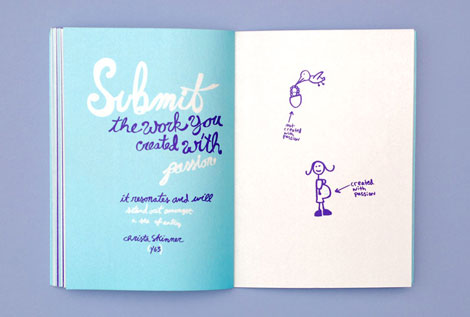 You talk about the disconnect between design school and the transition to
design professional — can you explain this disconnection? What does this
mean for new design graduates?
There are so many disconnects between being a student and professional designer. The main one being that once you enter the field, chances are that you’ll have to wear many different hats. You could be an animator, producer, storyboard artist, director and sound designer all in one project. This kind of multi-tasking is not taught at most schools. Also, most schools prepare students on how to make a nice portfolio and get a job. That’s fantastic but there is an entrepreneurial side to graphic design as well. In our classes we challenge students to act as authors and curators as well as designers. Instead of designing content we encourage them to produce it. That way when they graduate they can get a job at a design firm but also start a music
label, skate company or write a book on the transitioning to professional practice. 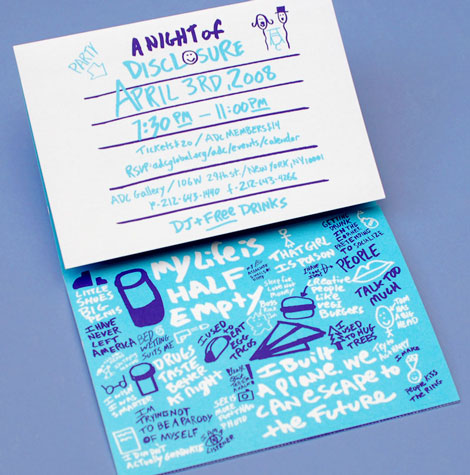 What can design schools do about this disconnect?
The most valuable class we had at CCA was thesis, taught by Michael Vanderbyl. In his class we had to create a project that had a life outside of the classroom. Produce and manage all the content as well as design it. The critiques were very grueling and students failed quite often. Thesis gave us such a solid
understanding of production and presentation that once we graduated we were ready to pitch our ideas to anyone. Being able to author, design and pitch ideas is the most valuable tool we can give students.

Students pay huge amounts to attend design school. As you look back on your
education do you think that it was worth the cost? Why or why not?
We were fortunate enough to have very dedicated teachers that pushed us to the next level. The access and connections we gained by being around such talented people help us to this day. Between both of us, we’ve gone through high-school vocational programs, community colleges, state schools and art schools. Its fair to say you get what you pay for. Plus both of us contemplated dropping out of college at one point or another and are glad we stuck it out. 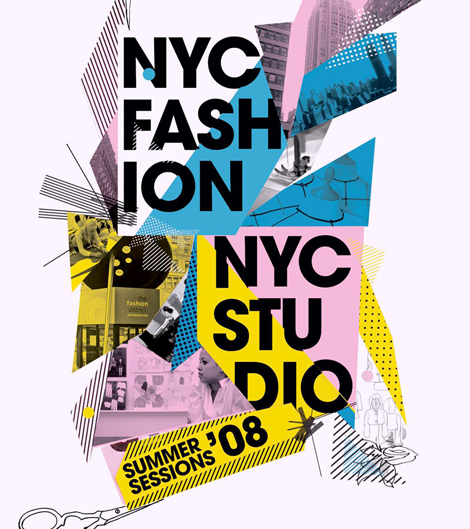 You both teach a design class at Pratt Institute as well. How has teaching
impacted your work?
Teaching is incredibly valuable. It keeps us fresh, coming into class and seeing what our students come up with is a treat (most of the time…). It helped us lean how to present in front of crowds, it helped us learn how to tell what is or isn’t working about something very quickly, it has made us aware of what’s in vogue and has given us access to some amazing talent. 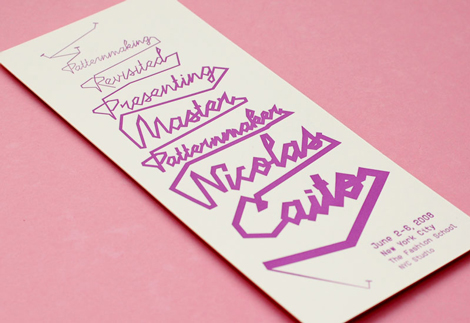 What are your biggest design influences? What current designers do you
admire?
Our influences are very mixed, from chopped and screwed rap to Charlie Rose and from French Pornography to sneakers, we can draw inspiration from anything. There are too many people to name but we both enjoy the work of Storm Thorgerson, Mike Mills, Bob Gill and sometimes karlssonwilker.

What’s next for dress code? Another book?
Although we have a few books in the works, we are far from writing another one about design. We are hoping to write a script this year.