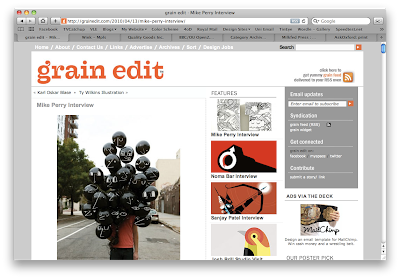 This Grain Edit interview takes us to New York’s largest burough—Brooklyn—and to the office of Mike Perry! I’m sure most here are quite familiar with his work. The style is very specific; you definitely know it when you see it. With the help of the fancy-shmancy Internet, Mike’s work seems often imitated, but never duplicated. There is only one Mike Perry, folks.

I became most familiar with Mike’s work with the publication of his first book,Hand Job: A Catalog of Type. While still in school I preordered it, as did many of my classmates. But I had my first real hands-on looks at it over at the studio where I was interning — they had an advance copy. I remember the smell, especially, as well as the general office ogling.

One of the things that strikes me the most about Mike’s work is that he can be making a zine or an object, putting on a show, or designing a typeface, or just doodling—all of his work feels consistent. With whatever he’s doing, you’re always entering the world of Mike Perry.

After the jump, Mike talks about various aspects of his work, his work history, and his favorite Brooklyn restaurant. Let’s get into it!

I was born in Kansas City and spent my youth bouncing around the metro area. For those readers that know the area I live in Grandview MO, Independence MO, Sugar Creek MO, Overland Park KS, & Stanley KS. My mom moved us around a lot.

How did you end up in Brooklyn?

Well I was living in Philadelphia working for Urban Outfitters and as things happen in a young mans life I met a girl. She lived in Brooklyn and I had done my time at Urban so I went for it. Never really wanting to move to NYC but excited about the possibilities. I actually planned on spending that first summer riding a BMX bike up and down my block. I didn’t do that once. I don’t even own a BMX bike. I instead was bombarded with work. I used to explain it like it was a cosmic thing that was happening. I move to New York and the work just came. And to be honest that is how it worked at first. I felt so lucky. Of course now looking back on the economic status of 5 years ago compared to today I was in the right place at the right time. 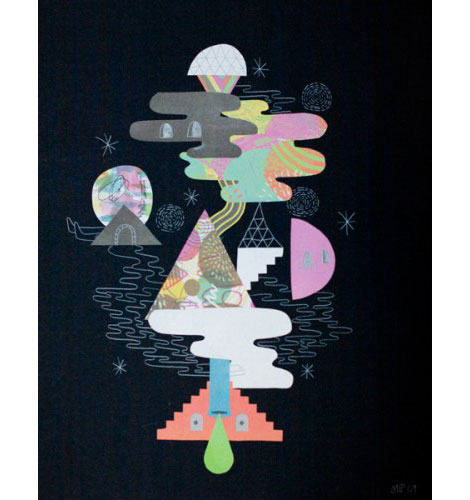 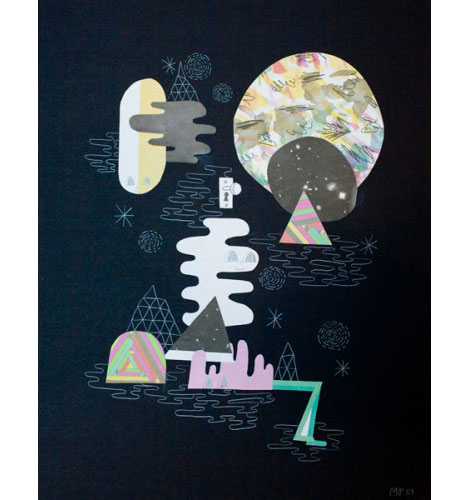 Did you attend a design school?

I did. I went to school in Minneapolis at the Minneapolis College of Art and Design. It was awesome and there is a huge community of my class mates in Brooklyn. 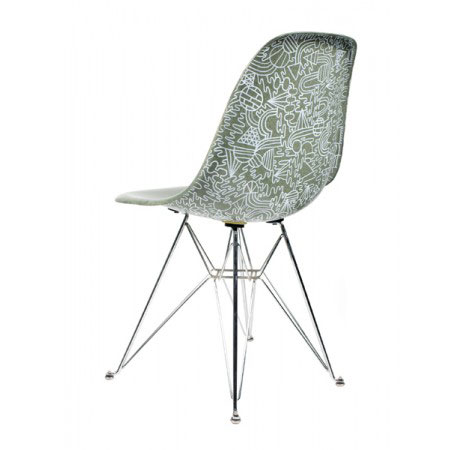 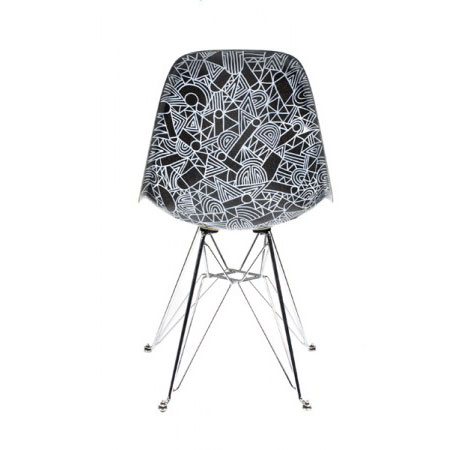 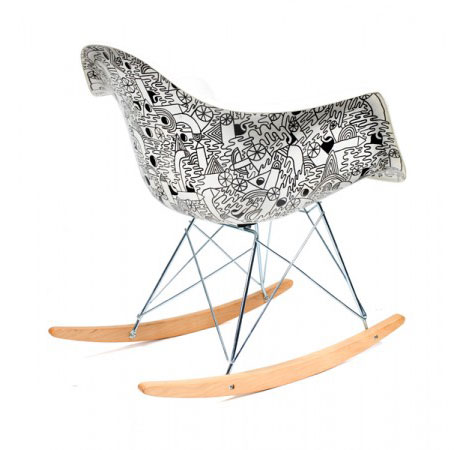 How did the college experience affect who you are today?

I kinda had a fuck you attitude but worked as hard as I could. I was there to learn and make it took me a little while to start loosing up. I didn’t drink my freshman year and just worked like a madman. I was studying painting at that time and I laughed at the idea of using a computer. I love how arrogant youth can leave you. But I was a purist. Lucky the school was smarter them me and I was forced to take a design / computer class and for some reason it just clicked. I made the craziest website all about chuck close. But the website was a maze. Who knows. From there I was hooked.

What was your first design job? 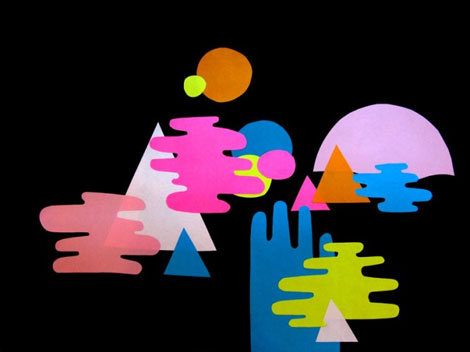 My first design job was for Urban Outfitters working for Grain Edit favorite Jim Datz. Jim hired me at a time where internet sales for retailers was not a focus but something everyone know they need to do. So we were kinda left to do our own thing. It was a blast. Jim trusted me and I admired him. It was just the two of use for the first year or so then we hired Damien Correll and Dan Keenan. The four of use worked in a large closet and we loved it. We had so much fun. We just listened to music all day and made things. There was a lot of exploration happening and that is still part of my daly process. Making for no reason other then to make.

Your work and design philosophy has a distinct hands-on quality to it. Have you always worked this way? Was it something you developed early on, in school, or did it come later?

As I said before I considered myself a painter from the age of 14 - 19. So a hands on approach was very important to me. That said my first year in the graphic design program I did a lot of vector graphics. My best friend was super into The Designers Republic and i felt clueless so I to was into them and to this day still am! But thats what felt like the future to me. But I quickly realized that I did not work well that way and just started including drawings in my projects. As soon as I did that it all felt natural.

How has teaching impacted your work?

It has been great. More important then learning from my students it has help me develop my 20 year goal. Be on the look out! 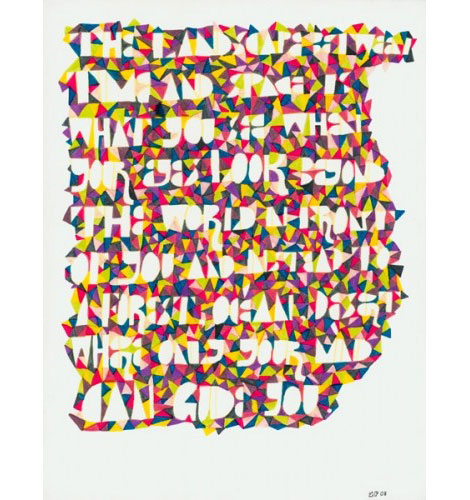 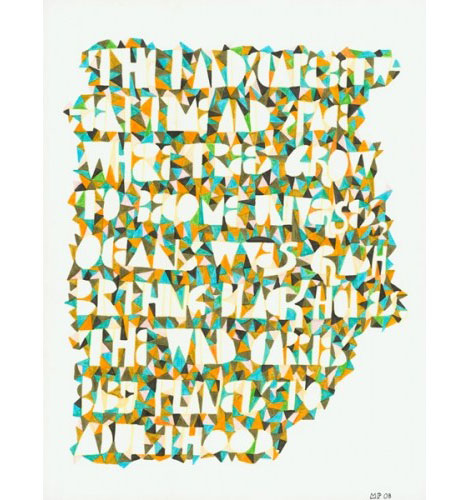 How process oriented is your work? How would you describe your creative process?

Very. I am always working on something a drawing a collage a mobile. And these things have a tendency to make there way into my projects. Not directly but in spirit.

What has inspired and shaped you the most as a designer? Are there certain things you think are essential for other designers to see, hear, read, or watch?

Friends and creative peers. I value this beyond any book, film, magazine. These are people that you share your life with. that you grow with. They push you and you push them.

Is there a specific type of music (or band?) that you feel translates well to the work that you make?

What does the typical Mike Perry work-day look like?

Well today I am at jury duty. waiting for them to call my name.

I am an early riser. So I get up and have a shower. Walk to my studio. Along the way I get a coffee. When I get in, I turn on NPR and listen to Morning Edition and read emails for a good hour. I then just jump into whatever it is that I am working on. In the afternoon I usually bounce around a lot between projects but in the morning I am focused. Unfortunately I almost always order lunch, have my 4th coffee of the day and focus on non-sitting projects. I use that antsy energy to screen print or build things then around 5:00 I settle down again and do more desk stuff. I head home around 7:00. 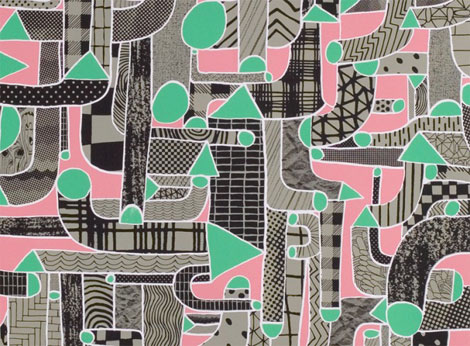 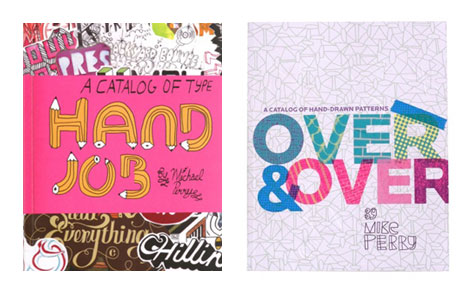 Mike’s previous two books, Hand Job, and Over & Over.

Yeah! I am working on a new book that will be out Spring 2011. But what I am the most excited about is an upcoming exhibition I am working on. It is in March in Minneapolis Minnesota and it is going to be awesome! It is a big solo show in a space that is 2800 sq. feet and I am making all new work!