In first year I watched a BBC television programme about the Gutenberg printing press that was presented by Stephen Fry. This is the overview of the programme...
"In this revealing documentary, Stephen Fry investigates the story of one of the most important machines ever invented - the Gutenberg Press. The printing press was the world's first mass-production machine. Its invention in the 1450s changed the world as dramatically as splitting the atom or sending men into space, sparking a cultural revolution that shaped the modern age. It is the machine that made us who we are today.

Stephen's investigation combines historical detective work and a hands-on challenge. He travels to France and Germany on the trail of Johannes Gutenberg, the inventor of the printing press and early media entrepreneur. Along the way he discovers the lengths Gutenberg went to keep his project secret, explores the role of avaricious investors and unscrupulous competitors, and discovers why printing mattered so much in medieval Europe.

But to really understand the man and his machine, Stephen gets his hands dirty - assembling a team of craftsmen and helping them build a working replica of Gutenberg's original press. He learns how to make paper the 15th-century way and works as an apprentice in a metal foundry in preparation for the experiment to put the replica press through its paces. Can Stephen's modern-day team match the achievement of Gutenberg's medieval craftsmen?" 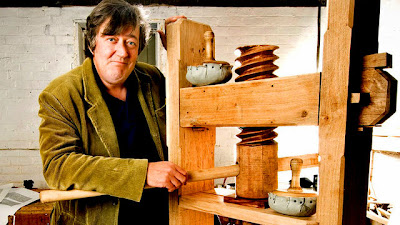 I was able to find the programme and watch it again. I realised that the majority of what I knew about printing and how the printing press came into being came from this documentary. I am really pleased that I was able to watch it again. It is a very interesting but detailed and informative investigation of how modern day printing was developed. The main attraction of the film is the creation and building of a Gutenberg press from historical recordings of what the original press looked like. I find it astonishing how something that was created over 5 centuries ago still has so much impact on the way printing is done today. The development of the printing press has made commercial print and designing for print a global necessity.